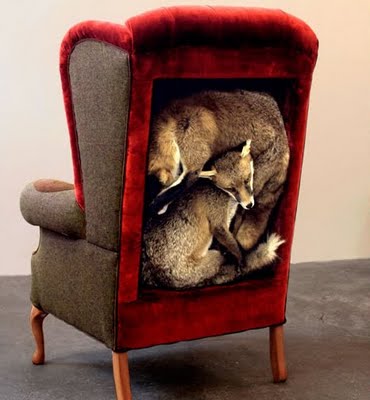 Okay, things are about to get weird.  A while back I got sucked into a reality show on the History Channel that followed the life of a taxidermy shop in Alaska.  I was instantly entranced.  I had never really given any thought about what might go into mounting an animal.  It is quite amazing how much skill and craftsmanship is needed to essentially bring an animal back to life.  While I was watching this program I couldn’t help but notice that taxidermy kind of reminded me of upholstery.  While we (upholsterers) do not use bone saws and flesh scrapers, we do share some tools in common as well techniques.  Both taxidermist and upholsterers drape and manipulate a “material” to accurately fit onto a structure.  After a little google-ing, I found some pretty fascinating pieces that could fit into the category of both taxidermy AND upholstery. 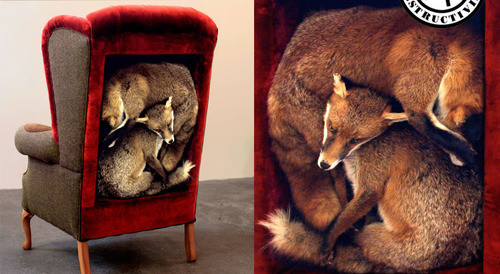 This creative collaboration of taxidermy and upholstery was imagined by a former British Singer, Alannah Currie (aka Miss Pokeno).  What an unassuming little surprise on this wing back.  Miss Currie is a vegetarian and only uses road kill or animals that have died naturally. 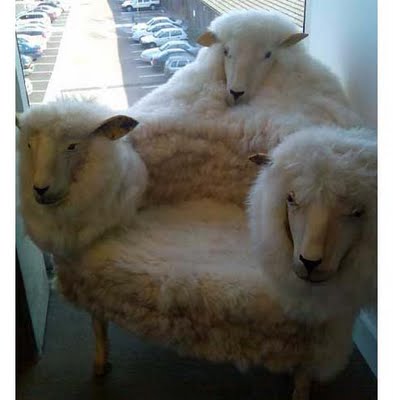 Yep…this is a three headed sheep.  It is believed to have been created by a theater student from Australia and used in a production of “A Mid-Summer Night’s Dream”.  Very bizarre. 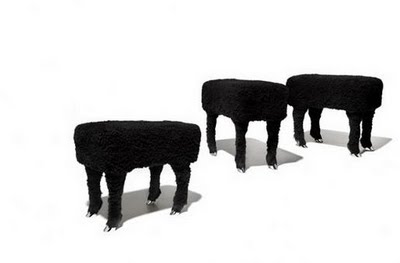 These anatomically correct black sheep stools were made using an entire sheep for each stool.  The hooves have been cast in silver.  These “princess” stools were created by Icelandic designer Hlynur V. Atlason in collaboration with taxidermist Frank J. Zitz and Company. 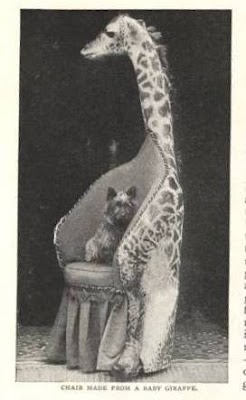 Warning!  These next few photos are kind of sad.  This chair belongs to Nimrod, Mr. J. Gardiner Muir, of ‘Hillcrest,’ Market Harborough.  The baby giraffe, along with its mother, was shot by Mr. Gardiner Muir himself, near the Kiboko River, in British East Africa.  It was designed by Rowland Ward, of Piccadilly. 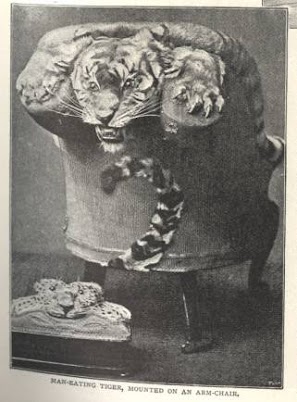 Yikes!  I’m not sure how one could ever relax in this chair.  This chair has a pretty interesting story.  Legend has it that this very tiger was a feared man-eater in Travencore (India).  The day this kitty was shot, he was found in a village hunting for a meal.  The tiger did in fact carry off a ten year old girl.   The girl was rescued but sadly died later that night.  So…maybe we don’t have to feel so bad about this chair. 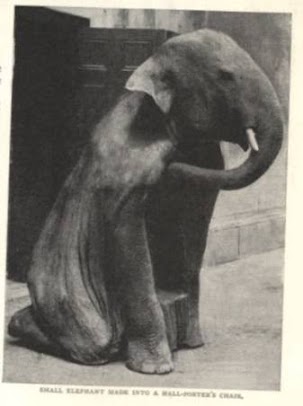 This one is hard for me to stomach.  I love baby elephants.  This chair was designed by the same fellow that created the baby giraffe chair.  The chair is meant to be a hall porter chair.  If you are like me and you just said “what is a hall porter?” well, a hall porter is someone who guards an entrance or someone who keeps watch over something.

Well gang, I hoped this post of animals being turned into furniture didn’t distress you too much.  I thought it would be neat-o to see the parallels of upholstery and taxidermy.  Anyone know of any taxidermy classes?