We (the Sprucettes) are visual people. Paying attention to fine details is part of each of our job descriptions, considering we work with designer fabric and all of the elements that go into beautiful pieces of furniture. And since we gather inspiration from everything we’re looking at on a regular basis, we thought it would be fun to share our top three movies and what we like about them. 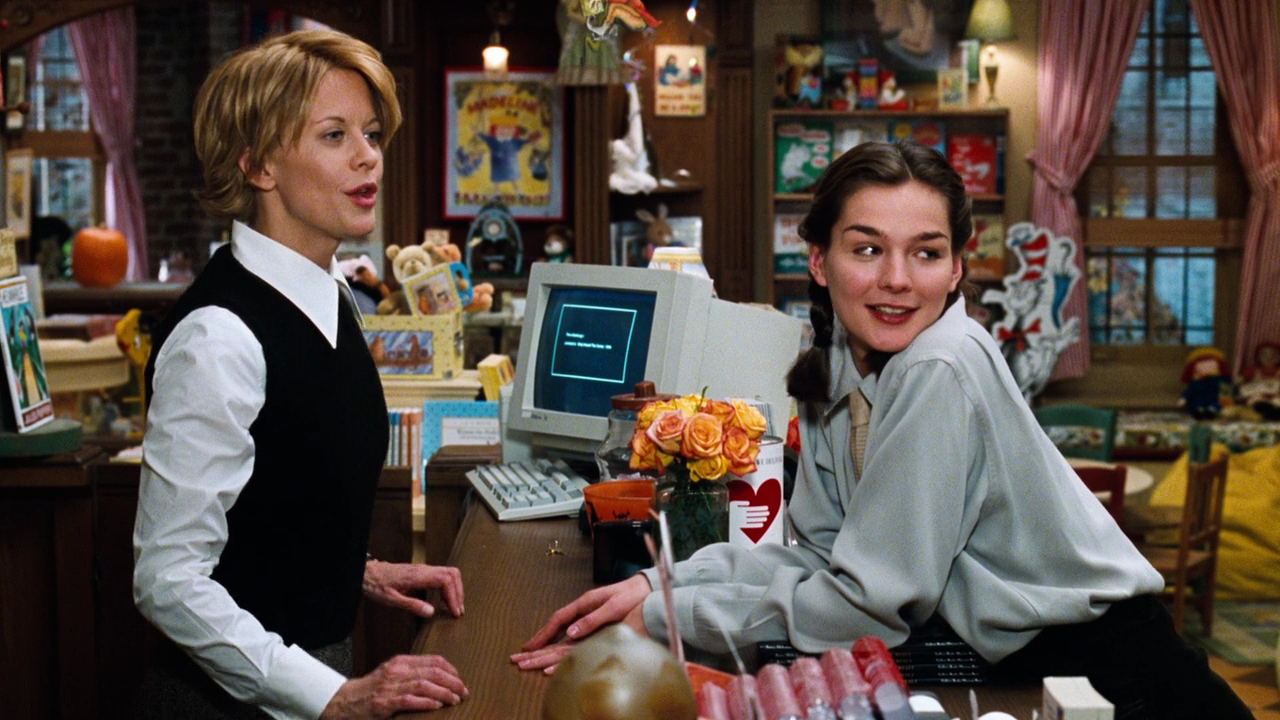 You’ve Got Mail. Photo courtesy of The Viewer’s Commentary.

You’ve Got Mail
This movie sprouted the first seedling of entrepreneurial spirit in me. Through high school and college, I had big dreams of moving to the Big Apple, and no movie portrayed my dreamy vision better than this one. New York in the fall, Kathleen Kelly’s charming bookstore and the dynamic romantic comedy duo (Tom Hank and Meg Ryan) make this movie numero uno on my list and the source of many of my favorite quotes: “Thank your, ladies and gentleman.” “I would send you a bouquet of sharpened pencils.” “F-O-X.” 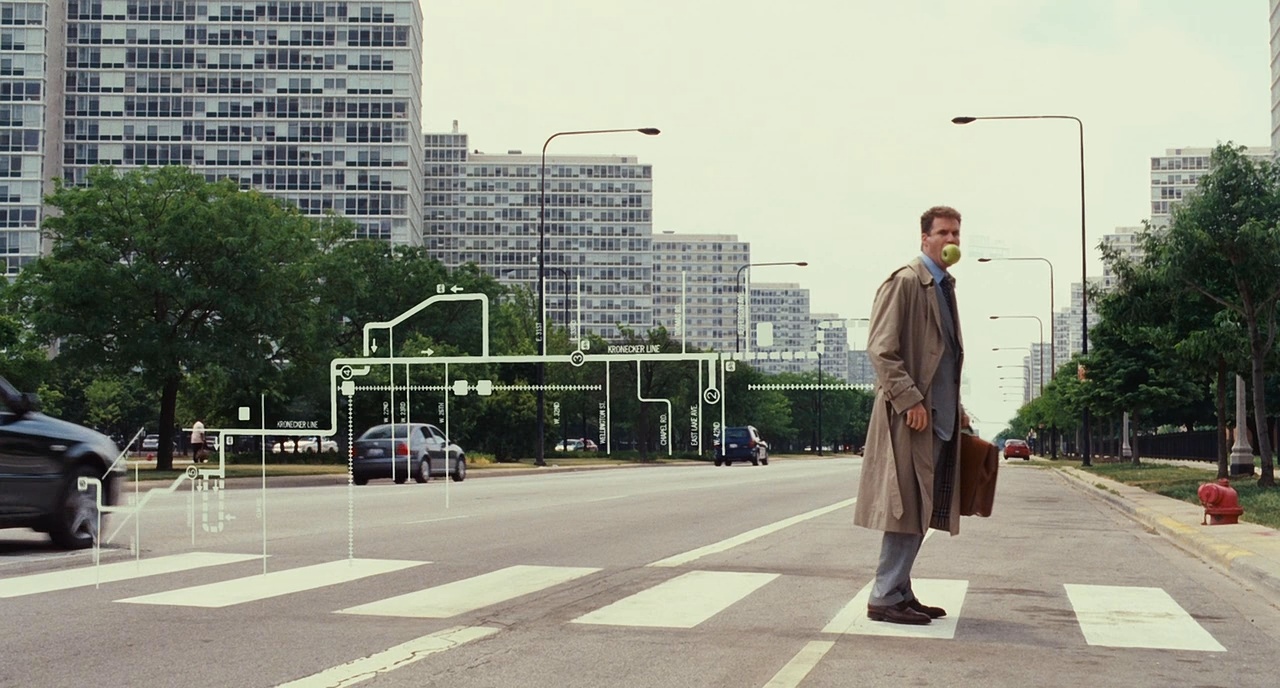 Stranger Than Fiction
If you need a feel-good movie, look no further. Will Ferrell, in one of his few (kinda) serious roles, plays a “tax man” who wakes one day to hear his every move narrated by the voice of Emma Thompson. Little does he know he’s playing out the plot of a novel; and his regimented, by-the-book life is turned upside down, resulting in a charming love affair and near-death experience. 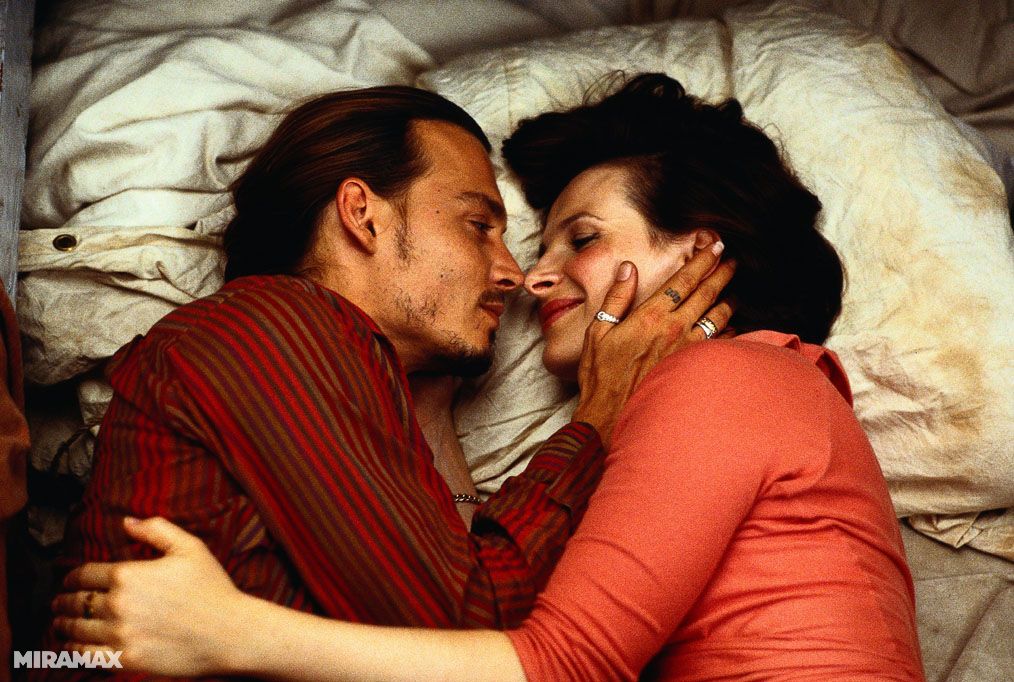 Chocolat
France, Johnny Depp, Chocolate — yes, please! I also love the contrast between the gray and drizzly French town and Vianne’s (played by Juliette Binoche) bright red and coral attire. If only we could solve our social dilemmas with a cup full of melted chocolate! Blade Runner
This is the most stylish, futuristic, dystopian film noir about a cop tracking down human clones! It’s based on a popular sci-fi novel by Phillip K. Dick, Do Androids Dream of Electric Sheep?, and directed by science fiction great Ridley Scott. I love all of the cast: Daryl Hannah, Sean Young looking HOT, Rutger Hauer looking great, and a young Edward James Olmos. Plus, the music is by Vangelis – so good! I used to listen to that soundtrack while sleeping. It’s so soothing.

Earth Girls Are Easy
This chick-flick about a trio of aliens befriending a young woman in California after landing in her pool is the epitome of valley girl and alien movies. It features the best ’80s apparel and hair. I want about every outfit in this movie. I love the credit card earrings one of the girls wears to a dance club. Jeff Goldblum, Jim Carrey and Damon Wayans (love his dance scene) are so handsome – and Downtown Julie Brown is killer in this!

It’s a toss-up for me on these because both have it all! For early breakdancing culture, these two are the tops. The music is hot, ranging from Afrikaa Bambaataa, Kraftwerk to Chaka Khan, Gradmaster Melle Mel and early Ice T! I cannot tell you how much these movies are connected to my formative years. There’s a scene in Beat Street where The Roxy holds an audition for a holiday talent show fundraiser that’s awesome. It’s a long montage filled with early hip-hop and breakin’ acts, compiling cameos of underground performers who weren’t exposed to the general public before that time. When I watch these movies, I’m bruised for a week after practicing windmills on my kitchen floor – no lie! Pee-Wee’s Big Adventure
Similar to Tim Burton’s Beetlejuice, this movie is insane and ridiculous in the best way. I love how stylized and over the top the set design is. I like watching it even more as an adult because I missed several of the jokes when I was a kid. Matilda
This is another classic from my youth. I love the whimsy and fantastical feel of this movie. What little kid didn’t want Matilda’s magical powers? Danny Devito and Rhea Pearlman play the perfect worst parents ever! My favorite scene is when Miss Trunchbull punishes the chubby boy by forcing him to eat a mammoth-sized cake. I always felt like I could have finished it! A League of Their Own. Photo courtesy of Chris and Elizabeth Watch Movies.

A League of Their Own
I like the idea that these women are feminine yet tough and badass – like the Sprucettes! Watching this makes me wish I played softball in the ’40s, and I’d love to name one of my kids Dottie, after Gena Davis’ character. I also enjoy the non-uniform, retro fashion of the time. I wish it were socially acceptable to wear white gloves and a nice hat to the grocery store; those were the days! Grey Gardens
If Edith Bouvier Beale and her daughter Edie were around today, they’d probably have their own reality show on Bravo. The reason the Masyles brothers even bothered capturing the reclusive pair in their deteriorating East Hampton mansion, filled with cats and raccoons, is because they were related to Jacqueline Lee Bouvier Kennedy Onassis. However, the documentary is entertaining to watch – from the moments where the two sing and dance to old records to the many scenes where Little Edie shares here philosophies on life while wearing eccentric and fabulous ensembles, like upside-down skirts pinned to her with brooches and gorgeous scarves tied around her head. Up. Photo courtesy of pixarwallpapers.blogspot.com.

Up
I’m a huge Pixar fan, and this one is definitely at the top of my list. It’s definitely a tearjerker; I cry every time during the montage of Carl and Ellie’s 70-year relationship together leading up to her death. It reminds me that it’s important to make every day count and not to push your dreams aside. Besides the fact that, like most Pixar films, it’s rich with lush, researched details, I love it because it combines two of my favorite loves: old people and travel. There are few children’s movies out there about adults in their ’70s going on wild adventures. Reality Bites. Photo courtesy of Journey of the Center of Fashion.

Reality Bites
This movie was the Girls of its time. It has sharp writing, a hip soundtrack and is about entitled, angst-y young adults. Winona Ryder’s character has to decide between a hot, young Ethan Hawke who can’t hold a job or a serious yuppie played by Ben Stiller. I think I watched it on repeat in my mid-twenties because it totally evokes being a post-college young adult trying to get it together, and I could totally relate. The only thing that could make this movie better is having more costume changes for Janeane Garofalo’s character, who rocks this indie-retro style I adore.