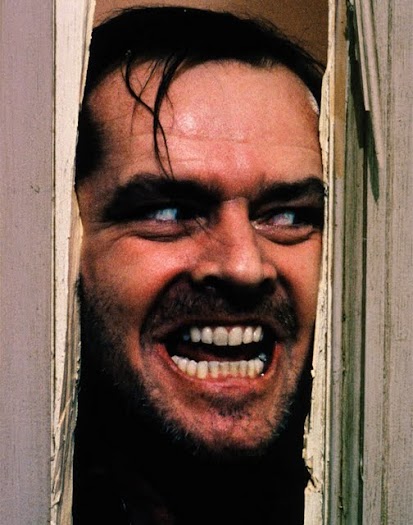 Okay.  So now that I have your attention, let’s talk about upholstery and design in movies.  As my passion and excitement for furniture is growing, I am finding it more of a challenge to watch a movie without getting distracted by a chair in the corner or a light fixture in the background.  Don’t make the mistake of thinking that the design of the set is an afterthought.  I would go as far as to say that in many movies, the set plays an important supporting role.  I could go on and on about movie sets that make me swoon, but for your sake, I will whittle it down to three.

Since I opened with the above scary photo, let’s talk about The Shining.  I have somehow managed to make it to age 27 without ever seeing this movie.  Thanks to The Paramount’s summer film series, my life is a little more complete.  There is so much that I could say about this psychological thriller but I will focus on the design. The setting is the Overlook Hotel in Colorado circa 1975.  Yes, it is creepy as hell, but once you get past that, you have to admit that the style is pretty groovy.  The design is rich with Native American patterns and geometric carpets.

Let’s lighten the mood and discuss a movie that could not be more opposite from The Shining,  Sex and the City II.  Alright, I am bound to anger someone when I say this, but I thought the movie was horrible.  The only things that kept me watching were the glimpses that I would get into Carrie and Big’s apartment and the fashion of course.  It was stunning.  I’ve done a little research on some of my favorite pieces, and it is amazing how much work Lydia Marks (the set designer) did to create this immaculate apartment.  There was one piece specifically that captivated me, the “Lola Ottoman” by designer Anne Kyyro Quinn.  When I saw this beautiful sculptural piece, my head nearly exploded.  I love it so so so much!

And last, but certainly not least, is a gorgeous movie titled A Single Man.  This movie was directed by fashion designer Tom Ford. Need I say more.  This movie made me feel ugly because everything in it was so beautiful, the clothes, the set, the people…EVERYTHING!  The movie stars Colin Firth and Julianne Moore and is incredibly touching and slightly depressing.  The house that Colin Firth’s character lives in is known as The Schaffer Residence and was built by John Lautner in 1949.  Plot aside, the set design makes up for anything that this film might lack.

Now it’s your turn.  Tell me, what movie’s set design do you love the most?